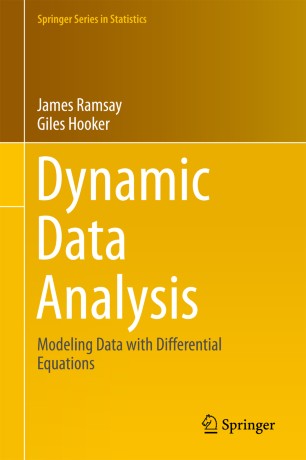 This text focuses on the use of smoothing methods for developing and estimating differential equations following recent developments in functional data analysis and building on techniques described in Ramsay and Silverman (2005) Functional Data Analysis. The central concept of a dynamical system as a buffer that translates sudden changes in input into smooth controlled output responses has led to applications of previously analyzed data, opening up entirely new opportunities for dynamical systems. The technical level has been kept low so that those with little or no exposure to differential equations as modeling objects can be brought into this data analysis landscape. There are already many texts on the mathematical properties of ordinary differential equations, or dynamic models, and there is a large literature distributed over many fields on models for real world processes consisting of differential equations. However, a researcher interested in fitting such a model to data, or a statistician interested in the properties of differential equations estimated from data will find rather less to work with. This book fills that gap.
Jim Ramsay, PhD, is Professor Emeritus of Psychology and an Associate Member in the Department of Mathematics and Statistics at McGill University. He received his PhD from Princeton University in 1966 in quantitative psychology. He has been President of the Psychometric Society and the Statistical Society of Canada. He received the Gold Medal in 1998 for his contributions to psychometrics and functional data analysis and Honorary Membership in 2012 from the Statistical Society of Canada.

Giles Hooker, PhD, is Associate Professor of Biological Statistics and Computational Biology at Cornell University. In addition to differential equation models, he has published extensively on functional data analysis and uncertainty quantification in machine learning. Much of his methodological work is inspired by collaborations in ecology and citizen science data.