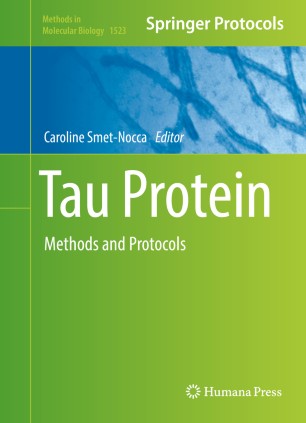 This detailed volume gathers basic and advanced methods and protocols from in vitro assays and in vivo models to address the molecular and functional aspects of tau physiopathology. Divided into five parts that illustrate the underlying molecular mechanisms of Tau functions and dysfunctions in Alzheimer’s disease and other dementia referred to as tauopathies, this volume discusses timely topics such as: conformational studies of native tau protein and investigation of its physiological function in microtubules binding and tubulin polymerization; in vitro methods of formation and detection of tau oligomers and PHF-like fibrils; characterization and in vitro introduction of post-translational modifications on tau proteins for further functional studies; analytical tools for the detection of tau proteins, their modifications and cellular interactions, and MAPT gene mutations in various biological samples; and cellular and in vivo models for the investigations of tau physiopathology. Written in the highly successful Methods in Molecular Biology series format, chapters include introductions to their respective topics, lists of the necessary materials and reagents, step-by-step, readily reproducible laboratory protocols, and tips on troubleshooting and avoiding known pitfalls.

Practical and cutting-edge, Tau Protein: Methods and Protocols is a valuable resource that addresses the most recent aspects of Alzheimer’s disease research related to Tau protein and state-of-the-art experimental techniques. It targets a broad scientific audience including molecular biologists and biochemists, as well as researchers interested in exploring the functions of tau proteins.