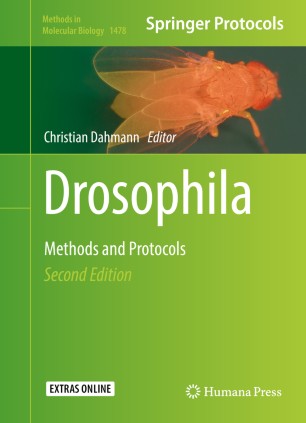 This second edition volume expands on the previous edition by presenting updated protocols for several of the techniques described in the first edition of Drosophila: Methods and Protocols, and current methods that cover recent breakthroughs in Drosophila research. The book begins with a description of FlyBase--a database of genes and genomes--followed by the presentation of systems for versatile gene expression in the fly. The first few chapters in this book detail gene knockdown and editing, including CRISPR-Cas9 and protein knockdown. The next few chapters are devoted to methods describing live imaging of different tissues and organs, followed by chapters on how to quantify image data and how to probe tissue mechanics by laser ablation. The next two chapters provide methods for analyzing transcription followed by protocols to study growth, metabolism, ageing, and behavior in Drosophila. This volume concludes with chapters on electrophysiological recordings and methods to establish cell lines. Written in the highly successful Methods in Molecular Biology series format, chapters include introductions to their respective topics, lists of the necessary materials and reagents, step-by-step, readily reproducible laboratory protocols, and tips on troubleshooting and avoiding known pitfalls.

Cutting-edge and thorough, Drosophila: Methods and Protocols, Second Edition is a valuable source of hands-on protocols and reviews for molecular, cell, and developmental biologists using Drosophila as model systems in their work.