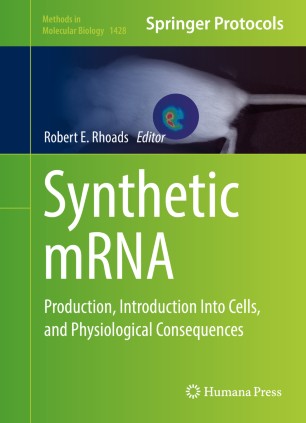 This volume presents detailed laboratory protocols for in vitro synthesis of mRNA with favorable properties, its introduction into cells by a variety of techniques, and the measurement of physiological and clinical consequences such as protein replacement and cancer immunotherapy. Synthetic techniques are described for structural features in mRNA that provide investigational tools such as fluorescence emission, click chemistry, photo-chemical crosslinking, and that produce mRNA with increased stability in the cell, increased translational efficiency, and reduced activation of the innate immune response. Protocols are described for clinical applications such as large-scale transfection of dendritic cells, production of GMP-grade mRNA, redirecting T cell specificity, and use of molecular adjuvants for RNA vaccines. Written in the highly successful Methods in Molecular Biology series format, chapters include introductions to their respective topics, lists of the necessary materials and reagents, step-by-step laboratory protocols, and tips on troubleshooting and avoiding known pitfalls.

Synthetic mRNA: Production, Introduction into Cells, and Physiological Consequences is a valuable and cutting-edge resource for both laboratory investigators and clinicians interested in this powerful and rapidly evolving technology.