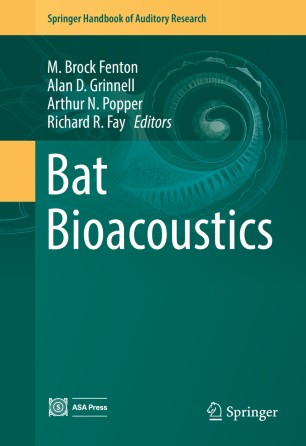 In Bat Bioacoustics we briefly review the history of  biosonar and echolocation (reminding readers of the 1995 Hearing by Bats).   Adaptations for biosonar make one of the most fascinating stories in neuroethology. The auditory systems, biosonar signals, and their central role in the biology of bats are front and center in this story.  Echolocation by bats has proven to be a virtual gold mine for colleagues studying neurobiology, while providing many rich examples of its impact on other areas of bats’ lives. This volume is aimed at graduate students and postdoctoral investigators, as well as professionals and academics.  It is intended to function as a high-profile and up-to-date reference work on bat bioacoustics.

·         A History of the Study of Echolocation by Alan D. Grinnell, Edwin Gould, and M. Brock Fenton

·         Phylogeny, Genes, and Hearing – Implications for the Evolution of Echolocation in Bats by Emma C. Teeling, Gareth Jones, and Stephen J. Rossiter

·         To Scream or to Listen? Prey Detection and Discrimination in Animal-Eating Bats by Patricia L. Jones, Rachel A. Page, and John M. Ratcliffe

·         Roles of Acoustic Social Communication in the Lives of Bats by Erin Gillam and M. Brock Fenton

·         Neural Coding of Signal Duration and Complex Acoustic Objects by Paul A. Faure and Uwe Firzlaff

·         The Neural Processing of Frequency Modulations in the Auditory System of Bats by George D. Pollak

·         Perceiving the World Through Echolocation and Vision by Annemarie Surlykke, James A. Simmons, and Cynthia F. Moss

About the Editors:
M. Brock Fenton is Professor Emeritus in the Department of Biology at Western University.

Alan D. Grinnell is Distinguished Professor of Integrative Biology and Physiology at the University of California, Los Angeles

Arthur N. Popper is Professor Emeritus and Research Professor in the Department of Biology at the University of Maryland, College Park.