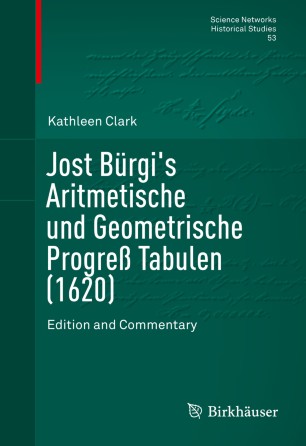 This monograph presents a groundbreaking scholarly treatment of the German mathematician Jost Bürgi’s original work on logarithms, Arithmetische und Geometrische Progreß Tabulen.  It provides the first-ever English translation of Bürgi’s text and illuminates his role in the development of the conception of logarithms, for which John Napier is traditionally given priority.  High-resolution scans of each page of the his handwritten text are reproduced for the reader and as a means of preserving an important work for which there are very few surviving copies.

The book begins with a brief biography of Bürgi to familiarize readers with his life and work, as well as to offer an historical context in which to explore his contributions.  The second chapter then describes the extant copies of the Arithmetische und Geometrische Progreß Tabulen, with a detailed description of the copy that is the focus of this book, the 1620 “Graz manuscript”.  A complete facsimile of the text is included in the next chapter, along with a corresponding transcription and an English translation; a transcription of a second version of the manuscript (the “Gdansk manuscript”) is included alongside that of the Graz edition so that readers can easily and closely examine the differences between the two.  The final chapter considers two important questions about Bürgi’s work, such as who was the copyist of the Graz manuscript and what the relationship is between the Graz and Gdansk versions.  Appendices are also included that contain a timeline of Bürgi’s life, the underlying concept of Napier’s construction of logarithms, and scans of all 58 sheets of the tables from Bürgi’s text.