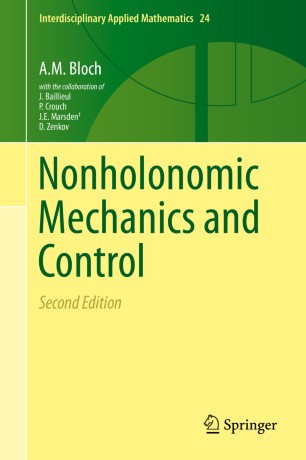 This book explores some of the connections between control theory and geometric mechanics; that is, control theory is linked with a geometric view of classical mechanics in both its Lagrangian and Hamiltonian formulations and in particular with the theory of mechanical systems subject to motion constraints. The synthesis of the topic is appropriate as there is a particularly rich connection between mechanics and nonlinear control theory. The book provides a unified treatment of nonlinear control theory and constrained mechanical systems and illustrates the elegant mathematics behind many simple, interesting, and useful mechanical examples. It is intended for graduate students who wish to learn this subject and researchers in the area who want to enhance their techniques.

The book contains sections focusing on physical examples and elementary terms, as well as theoretical sections that use sophisticated analysis and geometry. The first four chapters offer preliminaries and background information, while the remaining five are broken down into chapters on nonholonomic mechanics, control and stabilization, optimal control, energy-based, and recent energy-based techniques for mechanical and nonholonomic systems.

The second edition of the book extends many of the topics discussed in the first edition to incorporate both new research and more historical background. The additional material includes work on the Hamel equations and quasivelocities, discrete dynamics, bo

th holonomic and nonholonomic, Hamiltonization, and the Hamilton-Jacobi equation. In addition new examples and exercises have been added.

This book can be read on many different levels and has been described as a “delightful book that will be valuable for both the control community and researchers” .