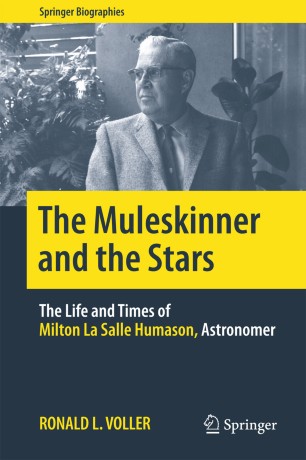 The Muleskinner and the Stars

The Life and Times of Milton La Salle Humason, Astronomer

Milt Humason’s unlikely story began on the shores of the Mississippi River in Winona, Minnesota, in 1891 and led to the foot of Mount Wilson outside Los Angeles, California, twelve years later. Captivated by his surroundings, the mountain would become the backdrop for his life and career over the next six decades as he first helped build George Ellery Hale’s observatory on the summit and then rose to become one of that institution’s leading figures through the first half of the twentieth century.

The story chronicles Humason’s life on Mount Wilson, from his first trip to the mountain to his days as a muleskinner, leading teams of mules hauling supplies to the summit during the construction of the observatory, and follows him through his extraordinary career in spectroscopy, working beside Edwin Hubble as the two helped to reconstruct our concept of the universe, despite having no formal education beyond the eighth grade. His work, which included assisting in the formulation of Hubble’s Law of redshifts, helped to set the field of cosmology solidly on its foundation.

Milton Humason was one of the most charismatic characters in science during the first half of the 20th century. Uneducated, streetwise, moonshining, roguish, humble and thoroughly down to earth, he rose by seizing opportunity and using his innate ability and incredible will to become the leading deep space observer of his day. “The Renaissance man of Mount Wilson,” as Harlow Shapley once referred to him, Humason’s extraordinary life reminds us that passion and purpose may find us at any moment.