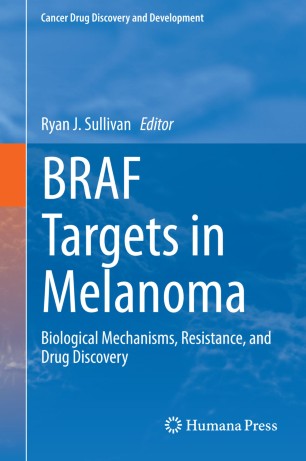 This volume contains a collection of writings from the leaders in the fields of Molecular Biology and Melanoma Research which will begin to tell the ever-expanding story of the most recent findings, discoveries, and potential of BRAF-directed targets in melanoma. Recent research has shown that BRAF inhibitors are effective for a short period of time, but there is little hope that these drugs as single agents will lead to durable benefit in a majority of patients. Among scientists and researchers who work in drug discovery, there is a lot of interest in the development of molecularly targeted cancer agents. Namely, the identification of a molecular target, the selection of molecules which effectively inhibit this target. What is starkly different about the development of this class of compounds, however, is that the mechanism of action of these agents are not as straightforward as was once previously assumed and the mechanisms of resistance that tumor cells employ to evade complete destruction are unlike any that have been described before. These discoveries in addition to utilization of modern molecular biology techniques have led to a series of hypotheses regarding which other types of molecules could be used in combination with BRAF-inhibitors in hopes of revolutionizing the potential of therapeutics in melanoma.

Dr. Ryan J. Sullivan is affiliated with Massachusetts General Hospital and Dana Farber. His research interests are in the development of novel molecular therapeutic agents for Kaposi sarcoma (KS) and malignant melanoma and the translation of promising preclinical findings into early stage clinical trials. He serves as the co-director of the Eugene Michael Egan Melanoma Translational Research Laboratory at Beth Israel Deaconess Medical Center (BIDMC) and is actively investigating promising biomarkers of response and benefit to immunotherapy and molecular targeted therapy for patients with melanoma.