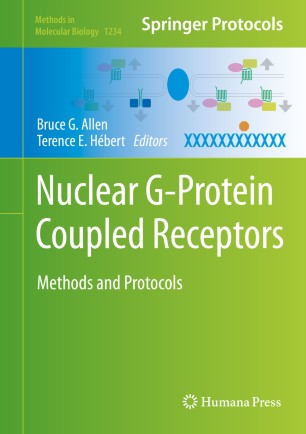 Nuclear G-Protein Coupled Receptors: Methods and Protocols is a compilation of a number of conceptual and methodological aspects important for the validation and characterization of intacrine signaling systems. To date, the best-characterized intracrine signaling system is that of angiotensin II (Ang II), covered in depth in various chapters. Methodology to study the subcellular localization and function of GPCRs and other signaling systems is provided, as well as numerous chapters focusing on methods designed to understand signaling mediated by nuclear and other internal GPCRs. Methods are also described to study the formation of second messengers such as cAMP and to study the trafficking of receptors from the cell surface. Written in the successful Methods in Molecular Biology series format, chapters include introductions to their respective topics, lists of the necessary materials and reagents, step-by-step, readily reproducible protocols, and notes on troubleshooting and avoiding known pitfalls.

Authoritative and easily accessible, Nuclear G-Protein Coupled Receptors: Methods and Protocols seeks to serve both professionals and novices with state-of-the-art approaches to characterize what is becoming a common theme in cellular signaling.