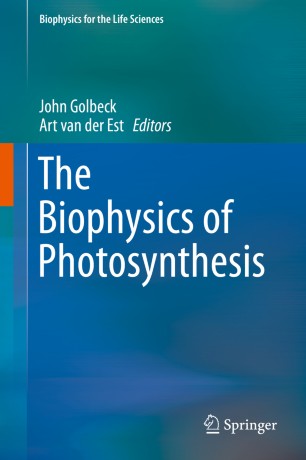 The Biophysics of Photosynthesis

Part of the Biophysics for the Life Sciences book series (BIOPHYS, volume 11)

The volume is intended as an introduction to the physical principles governing the main processes that occur in photosynthesis, with emphasis on the light reactions and electron transport chain. A unique feature of the photosynthetic apparatus is the fact that the molecular structures are known in detail for essentially all of its major components.  The availability of this data has allowed their functions to be probed at a very fundamental level to discover the design principles that have guided evolution.  Other volumes on photosynthesis have tended to focus on single components or on a specific set of biophysical techniques, and the authors’ goal is to provide new researchers with an introduction to the overall field of photosynthesis.

The book is divided into sections, each dealing with one of the main physical processes in photosynthetic energy conversion. Each section has several chapters each describing the role that a basic physical property, such as charge or spin, plays in governing the process being discussed. The chapters proceed in an orderly fashion from a quantum mechanical description of early processes on an ultrafast timescale to a classical treatment of electron transfer and catalysis on a biochemical timescale culminating in evolutionary principles on a geological timescale.