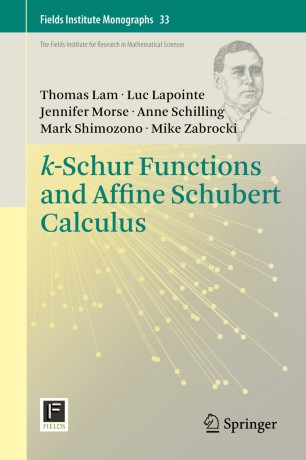 This book gives an introduction to the very active field of combinatorics of affine Schubert calculus, explains the current state of the art, and states the current open problems. Affine Schubert calculus lies at the crossroads of combinatorics, geometry, and representation theory. Its modern development is motivated by two seemingly unrelated directions. One is the introduction of k-Schur functions in the study of Macdonald polynomial positivity, a mostly combinatorial branch of symmetric function theory. The other direction is the study of the Schubert bases of the (co)homology of the affine Grassmannian, an algebro-topological formulation of a problem in enumerative geometry.

This is the first introductory text on this subject. It contains many examples in Sage, a free open source general purpose mathematical software system, to entice the reader to investigate the open problems. This book is written for advanced undergraduate and graduate students, as well as researchers, who want to become familiar with this fascinating new field.