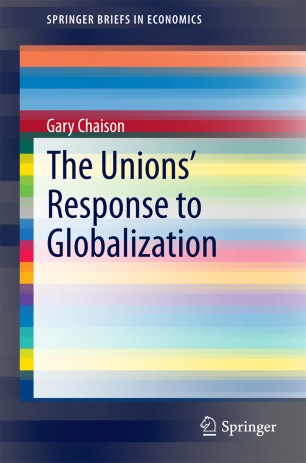 The Unions’ Response to Globalization

Part of the SpringerBriefs in Economics book series (BRIEFSECONOMICS, volume 51)

Globalization is commonly described in trade and cultural terms but its impact on unions and collective bargaining is seldom assessed. The few studies of unions and globalization are mostly collections of cases studies of how unions can work together or with other alliance partners to defend against the power of multinational corporations. This book goes beyond the current research by asking how unions have tried to deal with globalization and how globalization might threaten the fundamental union mission of taking wages, hours and conditions of employment out of competition. The introductory chapter defines globalization and uses the case of the Detroit Three automakers (GM, Chrysler and Ford) to show how globalization can affect employment and union size, influence and relevancy. The second chapter shows how unions deal globalization through collective bargaining regarding outsourcing, alliances, strikes and political action, including lobbying and international work standards. The final chapter argues that the unions cannot continue unchanged in this age of globalization and asks what they must do to be effective and relevant.