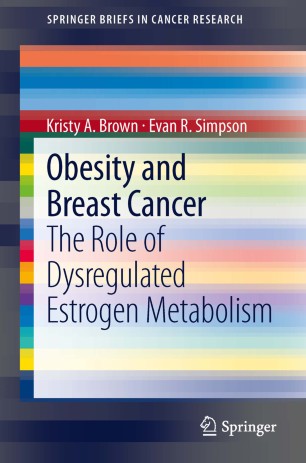 The Role of Dysregulated Estrogen Metabolism

Part of the SpringerBriefs in Cancer Research book series (BRIEFSCANCER)

Obesity is a risk factor for breast cancer in older women. A number of adipose-derived and obesity-related factors have been shown to affect tumour cell growth. These include adipokines, insulin, IGF-1 and oestrogens. The majority of obesity-related postmenopausal breast cancers are oestrogen-dependent. Since the ovaries no longer produce oestrogens after menopause, and that circulating levels are negligible, it is evident that it is the oestrogens produced locally within the breast adipose that are responsible for the increased growth of breast cancer cells. Aromatase is the enzyme that converts androgens into oestrogens and its regulation is dependent on the activity of a number of tissue-specific promoters. Targeting oestrogen biosynthesis in obesity may be useful for the prevention of breast cancer. Aromatase inhibitors are efficacious at treating postmenopausal breast cancer and recent studies suggest that they may also be useful in the prevention setting. However, these compounds inhibit the catalytic activity of aromatase and as a consequence lead to a number of undesirable side-effects, including arthralgia and possible cognitive defects due to inhibition of aromatase in the bone and brain, respectively. Novel therapies, such as those employed to treat obesity-associated disease, including anti-diabetics, may prove successful at inhibiting aromatase specifically within the breast. This SpringerBrief will explore all of these issues in depth and the authors are in a unique position to write about this topic, having extensive experience in the field of aromatase research.​

Kristy A. Brown, Ph.D., is a NHMRC Career Development Fellow and Co-Head of the Metabolism and Cancer Group at Prince Henry's Institute. Dr. Brown is also an Adjunct Lecturer of Physiology at Monash University. Dr Brown's area of research interest is the regulation of the aromatase gene in the context of obesity and breast cancer.

Evan Simpson, Ph.D., is a Senior Principal Research Fellow and Co-Head of the Metabolism and Cancer group at Prince Henry's Institute. He is also an Honorary Professor for the Department of Biochemistry and Molecular Biology and Monash University. Dr. Simpson is the Laboratory Director of the Victorian Breast Cancer Research Consortium. This consortium involves eight medical research institutes and was established in 1997 to conduct world class research into breast cancer. Dr. Simpson's work also led to the creation of the first aromatase knockout (ArKO) mouse, which is a model of oestrogen insufficiency that compares with the phenotype of humans with natural mutations in aromatase. His current research is focused on the role of oestrogen in several important health conditions, including obesity, diabetes, osteoporosis and of course, breast cancer.