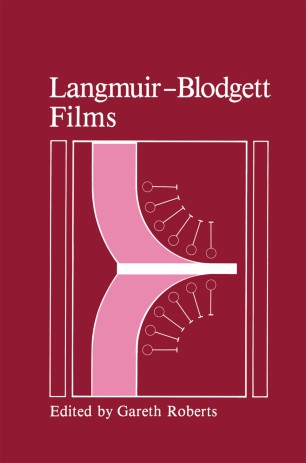 Monomolecular assemblies on substrates, now termed Langmuir-Blodgett (LB) films, have been studied for over half a century. Their development can be viewed in three stages. Following the pioneering work of Irving Langmuir and Katharine Blodgett in the late 1930s there was a brief flurry of activity just before and just after the Second World War. Many years later Hans Kuhn published his stimulating work on energy transfer. This German contribution to the field, made in the mid-1960s, can be regarded as laying the foundation for studies of artificial systems of cooperat­ ing molecules on solid substrates. However, the resurgence of activity in academic and industrial laboratories, which has resulted in four large international con­ ferences, would not have occurred but for British and French groups highlighting the possible applications of LB films in thefield of electronics. Many academic and industrial establishments involved in high technology are now active in or maintaining a watching brief on the field. Nevertheless this impor­ tant area of solid state science is still perhaps largely unfamiliar to many involved in materials or electronic device research. The richness of the variety of organic molecular materials suitable for LB film deposition offers enormous scope for those interested in their basic properties or their practical applications. LB films are now an integral part of the field of molecular electronics. It seems inevitable that they will play some role in replacing inorganic materials in certain areas of application.