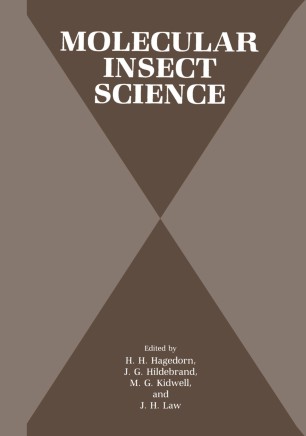 This volume contains the scientific papers and abstracts of posters presented at the International Symposium on Molecular Insect Science held in Tucson, Arizona, October 22-27, 1989. This meeting was organized by the Center for Insect Science at the University of Arizona in response to the growing need for a forum dedicated to the impact of modern biology on insect science. While scientific studies of a few insects, notably Drosophila melanogaster, have always had a central role in the development of biology, it is only recently that tools have become available to extend these studies to other insects, including those having economic and medical importance. The Tucson meeting was evidence of how far we have come in extending modern biological tools to the study of insects. It is also evident from the contents of this book that the study of insects is making an increasingly important contribution to the advancement of biology generally. Given the large impact of insects on human life, such a development has considerable importance for human welfare, and of the welfare of the ecosystem as a whole. It should be noted that several of the participants who presented posters were invited to prepare full length papers to ensure that the book covered the major areas of insect science. The financial support of the National Science Foundation and the Monsanto Corporation is gratefully acknowledged. Thanks are also due to Sharon Richards for her dedicated work on the manuscripts. Henry H.