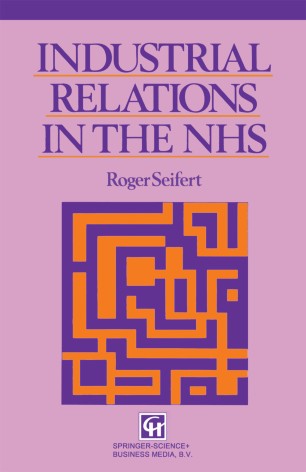 Industrial Relations in the NHS

This is the first book yet written on industrial relations in the NHS and it has been completed at a time of radical and rapid change. Some of the material, particularly in the final chapter, reflects first thoughts about the impact of the new system on industrial relations. The book arose from my teaching experiences with health service practitioners from several of the NHS trade unions and professional associations. Many of these activists, as well as managers, expressed frustration that there was no single source about some of the issues which concerned them. This book is the result of their anxieties. Throughout, I have assumed that the main thrust of government policy towards the NHS, at least since the early 1980s, has been to sell off important sections of the service to the private sector. There is, I believe, strong evidence for this proposition. My argument, however, is based not only on the evidence of government's will to 'privatize', but also on the behaviour of ministers, senior civil servants and senior NHS managers which adds up to a set of policies and practices which together allow the point that government runs the NHS as if it was going to sell it.