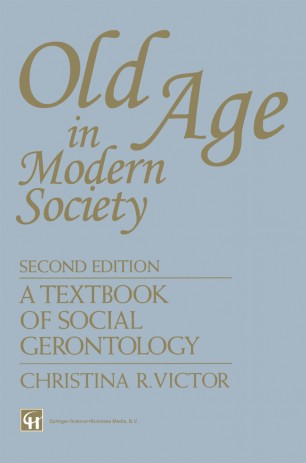 A textbook of social gerontology

Old age is a part of the lifecycle about which there are numerous myths and stereotypes. To present an overstatement of commonly held beliefs, the old are portrayed as dependent individuals, characterized by a lack of social autonomy, unloved and neglected by both their immediate family and friends; and posing a threat to the living standards of younger age groups by being a 'burden' that consumes without producing. Older people are perceived as a single homogeneous group, and the experiment of ageing characterized as being the same for all individuals, irrespective of the diversity of their circumstances before the onset of old age. In this book, detailed statistical material is used to portray the circum­ stances of older people in modern society in an attempt to evaluate the appropriateness (or otherwise) of the major stereotypes of later life. This volume does not address ageing from a psychological or micro-social per­ spective. In particular, we do not explore major issues relating to old age. Rather we feel that, from the extensive collection of surveys concerned with the elderly, we can provide a context within which individual eld­ erly people can be studied from more anthropological or biographical perspectives.