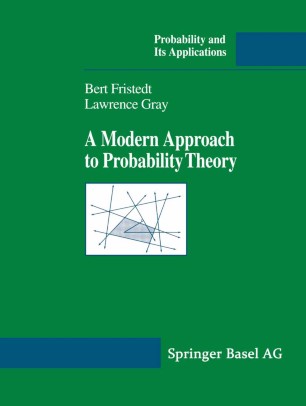 A Modern Approach to Probability Theory

Part of the Probability and its Applications book series (PA)

Overview This book is intended as a textbook in probability for graduate students in math­ ematics and related areas such as statistics, economics, physics, and operations research. Probability theory is a 'difficult' but productive marriage of mathemat­ ical abstraction and everyday intuition, and we have attempted to exhibit this fact. Thus we may appear at times to be obsessively careful in our presentation of the material, but our experience has shown that many students find them­ selves quite handicapped because they have never properly come to grips with the subtleties of the definitions and mathematical structures that form the foun­ dation of the field. Also, students may find many of the examples and problems to be computationally challenging, but it is our belief that one of the fascinat­ ing aspects of prob ability theory is its ability to say something concrete about the world around us, and we have done our best to coax the student into doing explicit calculations, often in the context of apparently elementary models. The practical applications of probability theory to various scientific fields are far-reaching, and a specialized treatment would be required to do justice to the interrelations between prob ability and any one of these areas. However, to give the reader a taste of the possibilities, we have included some examples, particularly from the field of statistics, such as order statistics, Dirichlet distri­ butions, and minimum variance unbiased estimation.