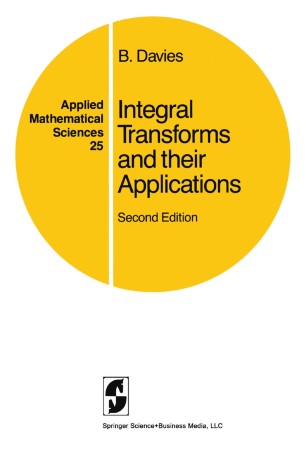 Integral Transforms and their Applications

In preparing this second edition I have restricted myself to making small corrections and changes to the first edition. Two chapters have had extensive changes made. First, the material of Sections 14.1 and 14.2 has been rewritten to make explicit reference to the book of Bleistein and Handelsman, which appeared after the original Chapter 14 had been written. Second, Chapter 21, on numerical methods, has been rewritten to take account of comparative work which was done by the author and Brian Martin, and published as a review paper. The material for all of these chapters was in fact, prepared for a transla­ tion of the book. Considerable thought has been given to a much more com­ prehensive revision and expansion of the book. In particular, there have been spectacular advances in the solution of some non-linear problems using isospectra1 methods, which may be re­ garded as a generalization of the Fourier transform. However, the subject is a large one, and even a modest introduction would have added substantially to the book. Moreover, the recent book by Dodd et al. is at a similar level to the present volume. Similarly, I have refrained from expanding the chapter on num­ erical methods into a complete new part of the book, since a specialized monograph on numerical methods is in preparation in collaboration with a colleague.