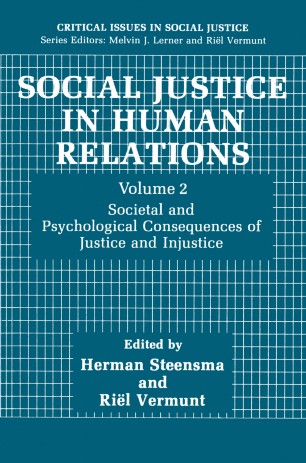 Societal and Psychological Consequences of Justice and Injustice

Justice plays an important role in our culture. The topic of justice has attracted the attention of scholars all over the world. Beginning in 1985, a continuing series of international conferences on social justice in The Netherlands at which scientists present and discuss started papers, exchange information, and choose new roads to theory build­ ing. In this volume, a selection of papers, presented at the International Conference on Social Justice in Human Relations (Leiden, 1986) is published. There has been some refinement and improvement, thanks to the comments made by experts in the field. The chapters in this volume represent second (and, in some cases, even third or fourth) versions of the papers. As organizers of the conference and editors of this volume, we hope that the reader will be pleased by the content and the high quality of the chapters. There is some diversity, but there also are some common themes. We have organized the chapters with respect to what we think are two important themes: (1) behavioral and attitudinal reactions to (in) justice and (2) macrojustice. These categories are not mutually exclusive, for some chapters could have been placed in both categories. Still, we think the distinction between these themes has value.