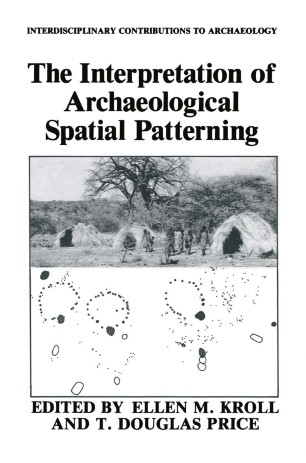 The Interpretation of Archaeological Spatial Patterning

Investigations of archaeological intrasite spatial patterns have generally taken one of two directions: studies that introduced and explored methods for the analysis of archaeological spatial patterns or those that described and analyzed the for­ mation of spatial patterns in actuaiistic-ethnographic, experimental, or natu­ ral-contexts. The archaeological studies were largely quantitative in nature, concerned with the recognition and definition of patterns; the actualistic efforts were often oriented more toward interpretation, dealing with how patterns formed and what they meant. Our research group on archaeological spatial analysis at the University of Wisconsin-Madison has been working for several years on both quantitative and interpretive problems. Both lines of investigation are closely related and are important complements. In order to demonstrate the convergence of archaeological and actualistic studies for the understanding of intrasite spatial patterns, we organized a sympo­ sium at the 52nd Annual Meeting of the Society of American Archaeology in Toronto, Canada, in May 1987. The symposium, titled "The Interpretation of Stone Age Archaeological Spatial Patterns," was organized into two sessions. The six papers presented in the morning session, five of which comprise Part I of this volume, focused on ethnoarchaeological and experimental research. Michael Schiffer was the discussant for this half of the symposium. Our intention for the ethnoarchaeological contributions to the symposium and volume was the delin­ eation of some of the significant accomplishments achieved thus far by actualistic studies regarding the formation of spatial patterns.