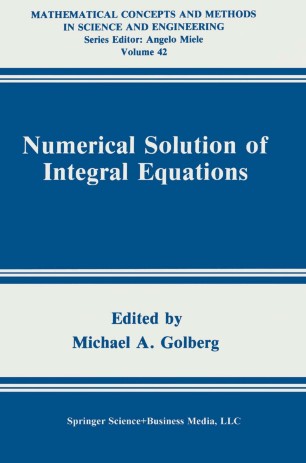 Part of the Mathematical Concepts and Methods in Science and Engineering book series (MCSENG, volume 42)

In 1979, I edited Volume 18 in this series: Solution Methods for Integral Equations: Theory and Applications. Since that time, there has been an explosive growth in all aspects of the numerical solution of integral equations. By my estimate over 2000 papers on this subject have been published in the last decade, and more than 60 books on theory and applications have appeared. In particular, as can be seen in many of the chapters in this book, integral equation techniques are playing an increas­ ingly important role in the solution of many scientific and engineering problems. For instance, the boundary element method discussed by Atkinson in Chapter 1 is becoming an equal partner with finite element and finite difference techniques for solving many types of partial differential equations. Obviously, in one volume it would be impossible to present a complete picture of what has taken place in this area during the past ten years. Consequently, we have chosen a number of subjects in which significant advances have been made that we feel have not been covered in depth in other books. For instance, ten years ago the theory of the numerical solution of Cauchy singular equations was in its infancy. Today, as shown by Golberg and Elliott in Chapters 5 and 6, the theory of polynomial approximations is essentially complete, although many details of practical implementation remain to be worked out.