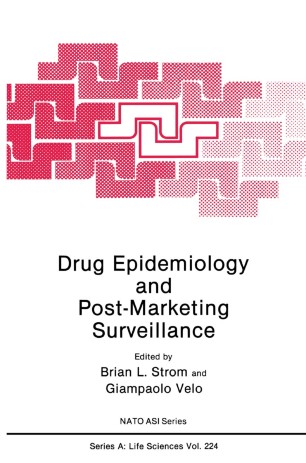 This volume is a summary of material presented in the course given in the International School of Phannacology on "Drug Epidemiology and Post-Marketing Surveillance" between September 27 and October 8, 1990, at the "Ettore Majorana Center for Scientific Culture" in Erice, Sicily. The course, which was a NATO Advanced Study Institute, included lectures and workshops presented by experts in the new field of phannacoepidemiology. The material covered includes various approaches to spontaneous reporting of adverse drug reactions, including aggregate approaches, such as those used in France, and detailed analyses of individual reports, such as that done in The Netherlands and in Sweden. Also, included are studies using traditional epidemiology methods. In addition, modern pharmacoepidemiology makes considerable use of automated databases. As such, information is presented on their use as well. Phannacoepidemiology started in hospitals and some of the newest work in the field is returning to the hospital as a site for studies. Material on these topics was presented as well. Finally, selected new methodologic developments were outlined in specific examples presented that were of regulatory and commercial importance. This new field of phannacoepidemiology is exploding in interest internationally. Evidence of this is the increasing development of pharmacoepidemiology programs in industry, medical schools, pharmacy schools, and schools of public health. Also, there is a new International Society ofPhannacoepidemiology. Practitioners in this field tend to specialize in either analyses of spontaneous reporting or the use of formal epidemiologic techniques.