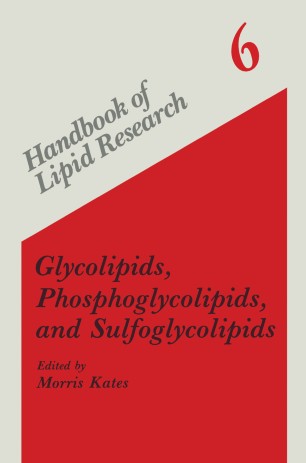 The early history and development of the field of glycolipids was concerned mainly with the predominant glycolipids found in higher animal tissues, namely the glycosphingolipids, as has been extensively documented by J. N. Kanfer and S. Hakomori in Volume 3 of this series. The major glycolipids in organisms of the plant kingdom, however, such as bacteria, yeasts and fungi, algae, and higher plants, are glycoglycerolipids, although glycosphingolipids are also present as minor components in these organisms, except for bacteria. It is of interest that one of the pioneers in glycosphingolipid research, Herbert E. Carter, also pioneered the discovery and structural elucidation of the plant galactosyldiacylglycerols. This class of glycolipids is present in chlo­ roplast membranes and must surely be one of the most ubiquitous and abun­ dant natural substances in the world, thereby deserving the attention of lipid biochemists. It is therefore surprising to learn that in contrast to the glycosphingolipids, which were discovered in the 1870s, glycoglycerolipids were not discovered until the 1950s. Since that time investigations of the structure and distribution of these glycolipids have proceeded at an exponen­ tially increasing rate, and much information is now available for representa­ tives of many genera of bacteria, yeasts, algae, and higher plants. Glycoglyce­ rolipids have also been identified in animal cells, particularly in the brain, testes, and sperm.