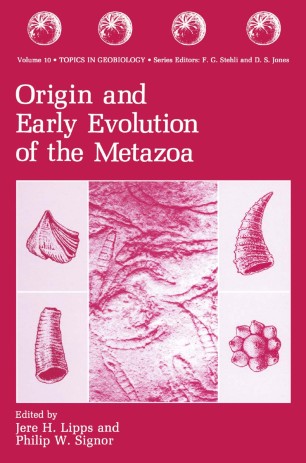 Origin and Early Evolution of the Metazoa

Part of the Topics in Geobiology book series (TGBI, volume 10)

Several years ago, we realized that the most prominent ideas that had been ex­ pressed about the origin and early evolution of the Metazoa seemed to have been developed chiefly by zoologists using evidence from modern species without reference to the fossil record. Paleontologists had, in fact, put forth their own ideas but the zoological and the paleontological evidence were about the problem, seldom considered together, especially by zoologists. We believed that the paleon­ tological documentation of the first Metazoa was too scattered, too obscure to Western readers, and much of it too recent to have been readily available to our colleagues in zoology. Whether or not that was entirely true, we thought that a single volume reviewing the fossil record of the earliest Metazoa would be useful to many in both paleontology and zoology, especially since so much new informa­ tion has been developed in the last few years. Some of this information has been summarized in general articles recently, but an overview of most of the field does not exist. We therefore organized this book in five parts so that the evidence could be placed in perspective and summarized and inferences made from it. Part I intro­ duces the previous hypotheses that have been proposed for the origin and early radiation of Metazoa. Part II consists of two summary chapters that set the sedi­ mentological, geochemical, and biological background to the known radiations of Metazoa.