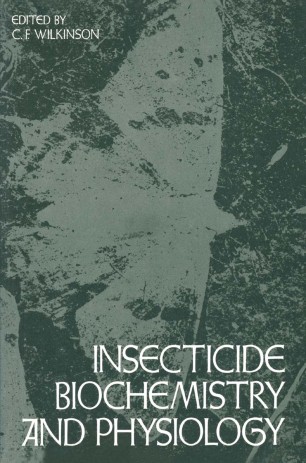 Only four short decades ago, the control of insect pests by means of chemicals was in its early infancy. The pioneers in the area consisted largely of a group of dedicated applied entomologists working to the best of their abilities with a very limited arsenal of chemicals that included inorganics (arsenicals, fluorides, etc.), some botanicals (nicotine), and a few synthetic organics (dinitro-o-cresol, organothiocyanates). Much of the early research was devoted to solving practical problems associated with the formulation and application of the few existing materials, and although the discovery of new types of insecticidal chemicals was undoubtedly a pipe dream in the minds of some, little or no basic research effort was expended in this direction. The discovery of the insecticidal properties of DDT by Paul Miiller in 1939 has to be viewed as the event which marked the birth of modern insecticide chemistry and which has served as the cornerstone for its subse­ quent developement. DDT clearly demonstrated for the first time the dramatic potential of synthetic organic chemicals for insect control and provided the initial stimulus which has caused insecticide chemistry to become a field not only of immense agricultural and public health importance but also one that has had remarkable and unforseeable repercussions in broad areas of the physical, biological, and social sciences. Indeed, there can be few other synthetic chemicals which will be judged in history to have had such a broad and telling impact on mankind as has DDT.