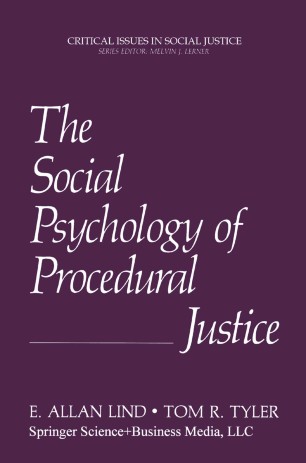 The Social Psychology of Procedural Justice

We dedicate this book to John Thibaut. He was mentor and personal friend to one of us, and his work had a profound intellectual influence on both of us. We were both strongly influenced by Thibaut's insightful articulation of the importance to psychology of the concept of pro­ cedural justice and by his empirical work with Laurens Walker in reactions to legal institu­ demonstrating the role of procedural justice tions. The great importance we accord the Thibaut and Walker work is evident throughout this volume. If anyone person can be said to have created an entire field of inquiry, John Thibaut created the psychological study of procedural justice. (To honor Thibaut thus in no sense reduces our recognition of the contributions of his co-worker, Laurens Walker, in the creation of the field. We are as certain that Walker would endorse our statement as we are that Thibaut, with characteristic modesty, would demur from it. ) Even to praise Thibaut in this fashion falls short of recognizing all of his contributions to procedural justice. Not only did he initiate the psy­ chological study of the topic, he also built much of the intellectual foun­ dation upon which the study of procedural justice rests. Thibaut's work with Harold Kelley (1959; Kelley & Thibaut, 1978) created a social psy­ chological theory of interdependence that, among many other applica­ tions, serves as the basis for one of the major models of the psychology of procedural justice.