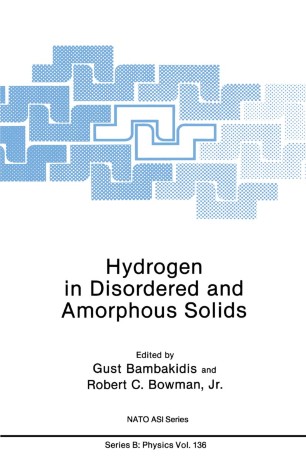 Hydrogen in Disordered and Amorphous Solids

This is the second volume in the NATO ASI series dealing with the topic of hydrogen in solids. The first (V. B76, Metal Hydrides) appeared five years ago and focussed primarily on crystalline phases of hydrided metallic systems. In the intervening period, the amorphous solid state has become an area of intense research activity, encompassing both metallic and non-metallic, e.g. semiconducting, systems. At the same time the problem of storage of hydrogen, which motivated the first ASI, continues to be important. In the case of metallic systems, there were early indications that metallic glasses and disordered alloys may be more corrosion resistant, less susceptible to embrittlement by hydrogen and have a higher hydrogen mobility than ordered metals or intermetallics. All of these properties are desirable for hydrogen storage. Subsequent research has shown that thermodynamic instability is a severe problem in many amorphous metal hydrides. The present ASI has provided an appropriate forum to focus on these issues.