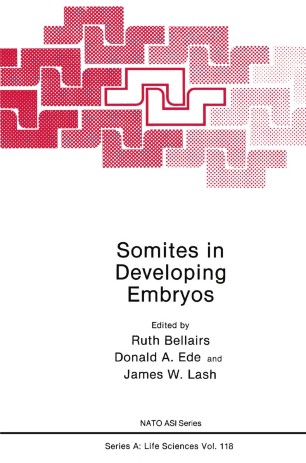 Somite development is a unique and important topic; unique because somitic mesoderm is the first tissue to become segmented, important because the somites - once established - exert a profound influence on other seg­ mental structures which form later. Somite development is of interest at a number of levels. In one aspect, demarcation of a specific number of somites and size regulation, it is a particularly intriguing example of embryonic pattern formation, 'especially in vew of its possible relation to homoeobox-controlled segmentation in insects. At another level, somite development has long been studied by compara­ tive anatomists, but only recently has new light been thrown on such sub­ jects as segmentation of the head, proposed in the 18th century by Goethe and now a live issue for developmental biologists. Somit es are simple when they first appear, but very complex structures arise from them. These include the vertebrae and the axial and other muscles and consequently there is a wealth of morphogenetic problems to be explored. Sometimes their morphogenesis is disturbed, by genetic or environ­ mental factors, and there are many clinical conditions which arise as a result.