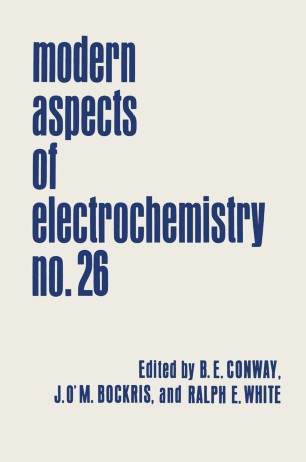 The present volume presents six chapters, two of them fairly brief, covering both fundamental and applied electrochemistry. The latter aspect has, of course, historical significance in the subject as well as a major technological profile in recent decades, while intimate connections between these complementary facets of the subject have always been a driving force for its earlier and continu­ ing development. In the Modern Aspects of Electrochemistry series we have periodically included contributions from the several schools of Russi~n electrochemistry. This approach is continued in the present volume by inclusion of the chapter by Benderskii, Brodskii, Daikhin, and Velichko from the Frumkin Institute, Moscow, on phase transitions among molecules adsorbed in the double-layer interphase at electrodes. This topic has attracted attention for some years through the works of the Russian school and of Gierst and Buess-Herman. Such behavior is also related to the important phenomenon of self-assembly of molecules in films at interfaces. In Chapter 1, these authors give an account of the factors associated with two-dimensional phase transitions and associated orientation effects with polar adsorbates at electrode interfaces. The theoretical interpretation of these effects are also treated in some detail. Chapter 2, by Rusling, deals with electrochemistry and electro­ catalysis in microemulsions, thus connecting aspects of electrode kinetics, adsorption at electrode interfaces, and colloid chemistry.