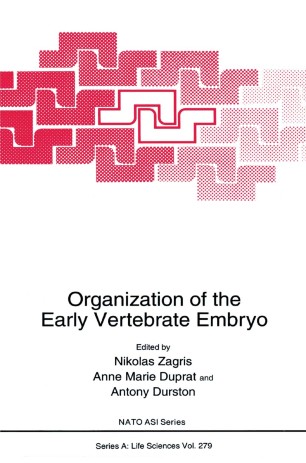 Organization of the Early Vertebrate Embryo

This book is the product of a NATO Advanced Study Institute of the same name, held at the Anargyrios and Korgialenios School on the island of Spetsai, Greece, in September 1994. The institute considered the molecular mechanisms which generate the body plan during vertebrate embryogenesis. The main topics discussed included: commitment and imprinting during germ cell differentiation; hierarchies of inductive cell interactions; the molecular functioning of Spemann's organizer and formation of embryonic axes; the extracellular matrix and the cytoskeleton in relation to morphogenesis and cell migration; neurogenesis and patterning of the neuraxis; the regulation of pattern formation by Hox genes and other transcription factors. This ASI was marked by a number of special features. An important one was that it brought together three different generations of embryologists: pioneers in classical embryology; scientists who are now leading the present molecular elucidation of vertebrate embryogenesis; and the promising younger ASI participants, some of whom are already making important contributions to this field. This aspect was very important in determining the character of the meeting. It exposed ambiguities in the classical embryological dogma and thus facilitated a subtle application of the recent molecular findings to classical problems. The second shining feature of this ASI was its evolutionary emphasis. The findings presented were obtained in four different vertebrate systems: mammals (the mouse), avians (the chicken), amphibians (Xenopus) and the teleost fishes (zebrafish).