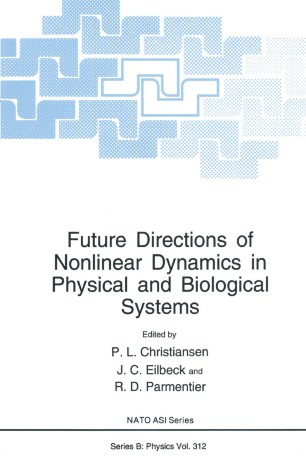 Future Directions of Nonlinear Dynamics in Physical and Biological Systems

Early in 1990 a scientific committee was formed for the purpose of organizing a high-level scientific meeting on Future Directions of Nonlinear Dynamics in Physical and Biological Systems, in honor of Alwyn Scott's 60th birthday (December 25, 1991). As preparations for the meeting proceeded, they were met with an unusually broad-scale and high level of enthusiasm on the part of the international nonlinear science community, resulting in a participation by 168 scientists from 23 different countries in the conference, which was held July 23 to August 11992 at the Laboratory of Applied Mathematical Physics and the Center for Modelling, Nonlinear Dynamics and Irreversible Thermodynamics (MIDIT) of the Technical University of Denmark. During the meeting about 50 lectures and 100 posters were presented in 9 working days. The contributions to this present volume have been grouped into the following chapters: 1. Integrability, Solitons, and Coherent Structures 2. Nonlinear Evolution Equations and Diffusive Systems 3. Chaotic and Stochastic Dynamics 4. Classical and Quantum Lattices and Fields 5. Superconductivity and Superconducting Devices 6. Nonlinear Optics 7. Davydov Solitons and Biomolecular Dynamics 8. Biological Systems and Neurophysics. AI Scott has made early and fundamental contributions to many of these different areas of nonlinear science. They form an important subset of the total number of the papers and posters presented at the meeting. Other papers from the meeting are being published in a special issue of Physica D Nonlinear Phenomena.