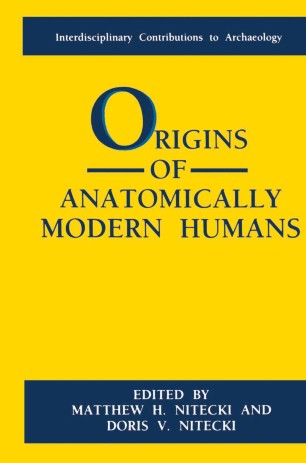 This volume is based on the Field Museum of Natural History Spring System­ atics Symposium held in Chicago on May 11, 1991. The financial support of Ray and Jean Auel and of the Field Museum is gratefully acknowledged. When we teach or write, we present only those elements that support our arguments. We avoid all weak points of our debate and all the uncer­ tainties of our models. Thus, we offer hypotheses as facts. Multiauthored books like ours, which simultaneously advocate and question diverse views, avoid the pitfalls and lessen the impact of indoctrination. In this volume we analyze the anthropological and biological disagreements and the positions taken on the origins of modern humans, point out difficultieswith the inter­ pretations, and suggest that the concept of the human origin can be explained only when we first attempt to define Homo sapiens sapiens. One of the major controversies in physical anthropology concerns the geographic origin of anatomically modern humans. It is undisputed, due to the extensive research of the Leakeys and their colleagues, that the family Hominidae originated in Africa, but the geographic origin of Homo sapiens sapiens is less concretely accepted. Two schools of thought existon this topic.