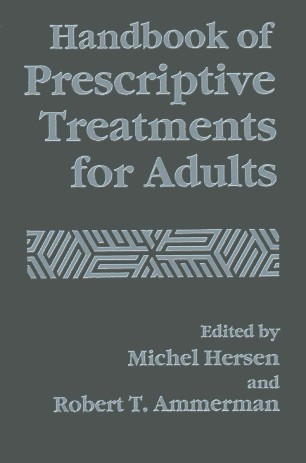 Handbook of Prescriptive Treatments for Adults

This book could not have been conceptualized or published 20 years ago. Indeed, it is doubtful that we could have organized the material for this handbook 10 years ago. Over the last 20 years, however, the painstaking efforts of many clinical researchers working with a variety of resistive psychopathologies have resulted in specific psychotherapies and pharmacotherapies that are effective with a significant propor­ tion of patients, at least for some of the disorders. Much clinical research remains to be carried out in the forthcoming decades. But now that we are nearing the 21st century, at least some statement about efficacy can be made. In 1967, Gordon Paul succinctly stated that the ultimate goal of treatment outcome research is to determine "What treatment, by whom, is most effective for this individual with that specific problem, and under which set of circumstances" (p. 111). At that time, empirical evaluations of psychosocial and pharmacologic treatments were few and far between. Methodological strategies for determining treatment effectiveness were also in the formative stage, as exemplified by introduc­ tion of control groups that received inactive interventions (i. e. , placebo) and the relatively recent practice of comparing two or more treatments in addition to placebo. In the almost three decades since Paul's oft-quoted dictum, both the quantity and the quality of treatment outcome research with adults have increased dramati­ cally.