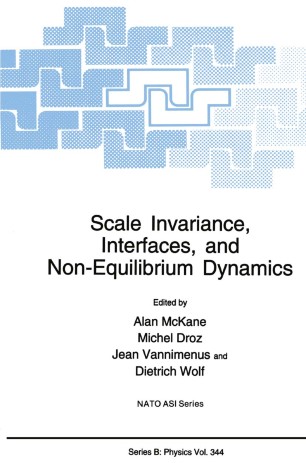 The NATO Advanced Study Institute on "Scale Invariance, Interfaces and Non­ Equilibrium Dynamics" was held at the Isaac Newton Institute for Mathematical Sciences in Cambridge, UK from 20-30 June 1994. The topics discussed at the Institute were all concerned with the origin and nature of complex structures found far from equilibrium. Examples ranged from reaction­ diffusion systems and hydrodynamics through to surface growth due to deposition. A common theme was that of scale invariance due to the self-similarity of the underly­ ing structures. The topics that were covered can be broadly classified as pattern for­ mation (theoretical, computational and experimental aspects), the non-equilibrium dynamics of the growth of interfaces and other manifolds, coarsening phenomena, generic scale invariance in driven systems and the concept of self-organized critical­ ity. The main feature of the Institute was the four one-hour-Iong lectures given each day by invited speakers. In addition to thirty-seven of these lectures, two contributed lectures were also given. The many questions that were asked after the lectures attested to the excitement and interest that the lecturers succeeded in generating amongst the students. In addition to the discussions initiated by lectures, an im­ portant component of the meeting were the poster sessions, where participants were able to present their own work, which took place on three of the afternoons. The list of titles given at the end of these proceedings gives some idea of the range and scope of these posters.