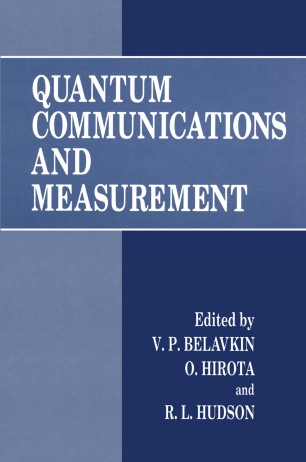 The International Workshop on Quantum Communications and Measurement was held at the University of Nottingham from July 10-16, 1994. It followed the successful meeting on Quantum Aspects of Optical Communications in Paris in November 1990. This time the conference was devoted to mathematical, physical and engineering aspects of quantum noise, signal processing and quantum informa­ tion in open systems, quantum channels, and optical communications. It brought research workers in the experimental and engineering aspects of quantum optics and communication systems into contact with theoreticians working in quantum probability and measurement theory. The workshop was attended by more than 130 participants from 22 different countries. The largest groups [after the UK (31)] were from Japan (19) and from Russia (14). The subjects discussed included the mathematical foundations of quantum communication systems, experiments and devices, the problem of collapse and continuous measurement, quantum input and output processes, causality and nondemolition observation, squeezed states, quan­ tum jumps, state diffusion and spontaneous localization, filtering and control in quantum systems, and new quantum optical phenomena and effects, including non­ classical light. These new mathematical and physical ideas were stimulated by recent advances in generation and detection of light with low quantum noise and the development of techniques for trapping a single atom over an extended period of time, making it possible to observe individual quantum phenomena at the macroscopic level.