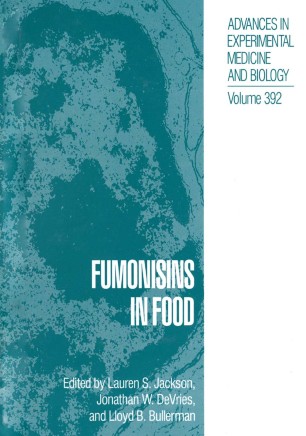 Part of the Advances in Experimental medicine and Biology book series (AEMB, volume 392)

The contents of this book are the proceedings of the ACS symposium, "Fumonisins in Food," which was held April 4-6, 1995, at the American Chemical Society National Meeting in Anaheim, CA. This symposi"Qm, which was international in scope, brought together researchers from diverse backgrounds in academia, government, and industry. Thirty-three speakers discussed topics ranging from the analysis offumonisins to toxicology and regulatory aspects. The fumonisins became the spotlight of mycotoxin research in 1988, when re­ searchers at the South African Medical Research Council isolated and structurally charac­ terized the fumonisins. Since 1988, there has been an explosion in the numbers of papers dealing with fumonisin-related topics. The interest in the fumonisins has arisen for several reasons. First, fumonisins are found in measurable concentrations in corn grown throughout the world. Second, these compounds have been implicated as the causative agents in a variety of naturally occurring animal diseases. Finally, there is speCUlation that fumonisins may in part be responsible for the high incidence of esophageal cancer in regions of the world in which corn is the staple grain.