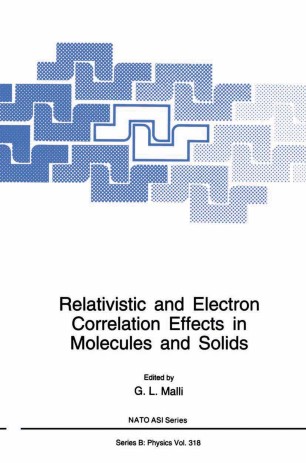 Relativistic and Electron Correlation Effects in Molecules and Solids

The NATO Advanced Study Institute (ASI) on "R@lativistic and Electron Correlation Effects in Molecules and Solids", co-sponsored by Simon Fraser University (SFU) and the Natural Sciences and Engineering Research Council of Canada (NSERC) was held Aug 10- 21, 1992 at the University of British Columbia (UBC), Vancouver, Canada. A total of 90 lecturers and students with backgrounds in Chemistry, Physics, Mathematics and various interdisciplinary subjects attended the ASI. In my proposal submitted to NATO for financial support for this ASI, I pointed out that a NATO ASI on the effects of relativity in many-electron systems was held ten years ago, [See G.L. Malli, (ed) Relativistic Effects in Atoms, Molecules and Solids, Plenum Press, Vol B87, New York, 1983]. Moreover, at a NATO Advanced Research Workshop (ARW) on advanced methods for molecular electronic structure "an assessment of state-of­ the-art of Electron Correlation ... " was carried out [see C.E. Dykstra, (ed), Advanced Theories and Computational Approaches to the Electronic Structure of Molecules, D. Reidel Publishin~ Company, Vol C133, Dordrecht, The Netherlands 1984]. However, during the last five years, it has become clear that the relativistic and electron correlation effects must be included in the theoretical treatment of many-electron molecules and solids of heavy elements (with Z > 70). Molecules and clusters containing heavy elements are of crucial importance in a number of areas of Chemistry and Physics such as nuclear fuels, catalysis, surface science, etc.