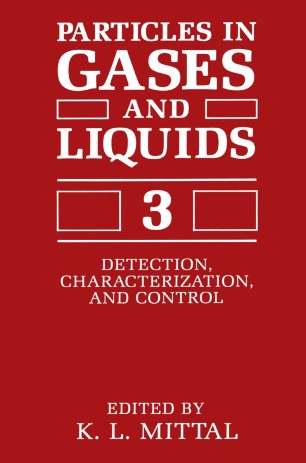 Particles in Gases and Liquids 3

This book documents the proceedings of the Third Symposium on Particles in Gases and Liquids: Detection, Characterization and Control held as a part of the 22nd Annual Meeting of the Fine Particle Society in San Jose, California, July 29-August 2, 1991. This series of symposia was initiated in 1987 in light of the growing importance to eliminate particles from process gases and liquids. As pointed out in the Preface to antecedent volumes in this series that particles in process gases and liquids could cause significant yield losses in precision manufacturing and concomitantly there has been heightened interest in understanding the behavior of particles in gases and liquids and devising ways to eliminate, or at least reduce substantially, these particles. The concern about particles in gases and liquids has been there for qui.te some time in the microelectronics arena, but there are other areas also where particles are of significant concern, e.g. in operation theatres in hospitals, food and beverage industry, and pharmaceutical manufacturing. This symposium basically had the same objectives as its predecessors, but to provide an update on the R&D activity taking place in the arena of particle detection, characterization and control. The printed program comprised a total of 28 papers dealing with variegated aspects of particles in gases and liquids. There were brisk and lively discussions and the attendees offered many positive comments, which goes to show that it was a well-received and needed symposium.