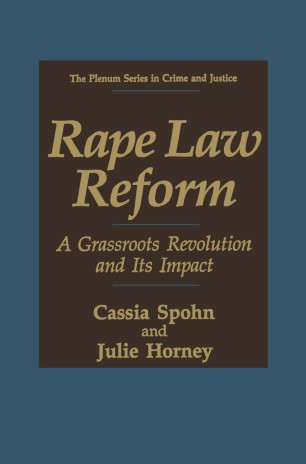 A Grassroots Revolution and Its Impact

This book evolved from our interest in rape as feminists and as sodal sdentists. As feminists, we were concemed about the treatment of rape victims and the attrition in rape cases under traditional rape law, and we welcomed legal reforms designed to improve the situation. As sodal sdentists, we wondered about the efficacy of legal changes aimed at an inherently resistant court system. We also were curious about the lack of studies examining the impact of these changes; we were particularly surprised to find that no one had attempted to ana­ lyze the impact of the reforms in more than one jurisdiction. Con­ vinced that untangling the effects of the reforms from the effects of contextual factors required a multijurisdictional study, we deeided to undertake the project. We quickly discovered that evaluating rape law reform in several jurisdictions would be no easy task. We had deeided that such an evaluation would require monthly data on the outcome of rape cases before and after the reforms were implemented, as weIl as qualitative data on the attitudes of criminal justice officials toward the reforms. Because states do not generate monthly data on case outcomes, we would have to collect the data ourse1ves from court records main­ tained by individual jurisdictions. To obtain an adequate number of cases for the time-series analysis, we would have to select our sites from large urban jurisdictions scattered throughout the United States.