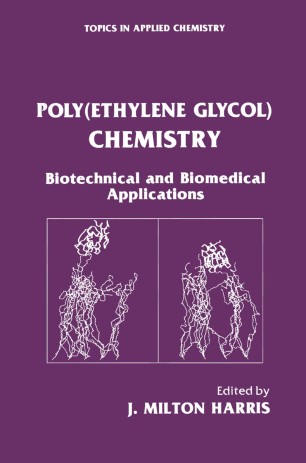 Part of the Topics in Applied Chemistry book series (TAPP)

The idea for this book came from discussions among participants in a symposium on biotechnical applications at the "Pacifichem 89" meeting in Honolulu. It was the majority opinion of this group that a volume dedicated to biotechnical and biomedical applications of PEG chemistry would enhance research and development in this area. Though the book was conceived at the Honolulu meeting, it is not a proceedings of this symposium. Several groups who did not participate in this meeting are repre­ sented in the book, and the book incorporates much work done after the meeting. The book does not include contributions in all related areas to which PEG chemistry has been applied. Several invited researchers declined to parti.:ipate, and there is not enough space in this single volume to properly cover all submissions. Chapter I-an overview of the topic-discusses in brief applications not given detailed coverage in specifically devoted chapters. The following topics are covered: introduction to and fundamental properties of PEG and derivatives in Chapters 1-3; separations using aqueous polymer two-phase partitioning in Chapters 4-6; PEG-proteins as catalysts in biotechnical applications in Chapters 7 and 8; biomedical applications of PEG-proteins in Chapters 9-13; PEG­ modified surfaces for a variety of biomedical and biotechnical applications in Chapters 14-20; and synthesis of new PEG derivatives in Chapters 21 and 22.