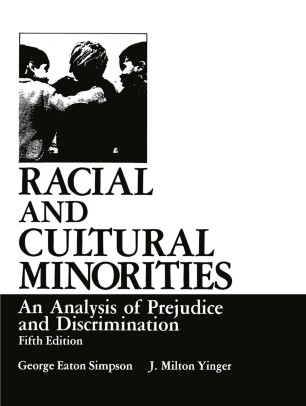 An Analysis of Prejudice and Discrimination

We need scarcely note that the topic of this book is the stuff of headlines. Around the world, political, economic, educational, military, religious, and social relations of every variety have a racial or ethnic component. One cannot begin to understand the history or contemporary situation of the United States, the Soviet Union, China, Zimbabwe, South Africa, Great Britain, Lebanon, Mexico, Canada-indeed, almost any land-without careful attention to the influence of cultural and racial divisions. Preparation of this new edition has brought a strong sense of deja vu, with regard both to the persistence of old patterns of discrimination, even if in new guises, and also to the persistence of limited and constraining explanations. We have also found, however, rich new empirical studies, new theoretical perspectives, and greatly expanded activity and analyses from members of minority groups. Although this edition is an extensive revision, with reference both to the data used and the theoretical approaches examined, we have not shifted from our basically analytical perspective. We strongly support efforts to reduce discrimination and prejudice; but these can be successful only if we try to understand where we are and what forces are creating the existing situation. We hope to reduce the tendency to use declarations and condem­ nations of other persons' actions as substitutes for an investigation of their causes and consequences.