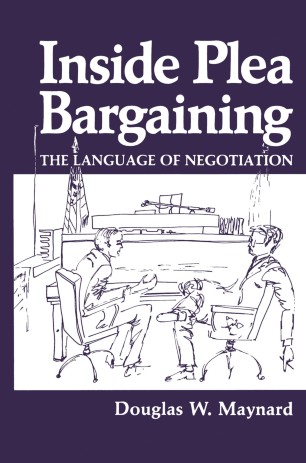 The Language of Negotiation

Negotiation is a ubiquitous part of social life. Some even say that social order itself is a negotiated phenomenon. Yet the study of negotiation as an actual discourse activity, occurring between people who have substantial interests and tasks in the real social world, is in its infancy. This is the more surprising because plea bargaining, as a specific form of negotiation, has recently been the center of an enormous amount of research attention. Much of the concern has been directed to basic ques­ tions of justice, such as how fair the process is, whether it is unduly coercive, and whether it accurately separates the guilty from the innocent. A study such as mine does not try to answer these sorts of questions. I believe that we are not in a position to answer them until we approach plea bargaining on its own complex terms. Previous studies that have attempted to provide a general picture of the process as a way to assess its degree of justness have neglected the specific skills by which prac­ titioners bargain and negotiate, the particular procedures through which various surface features such as character assessment are accomplished, and concrete ways in which justice is administered and, simultaneously, caseloads are managed.