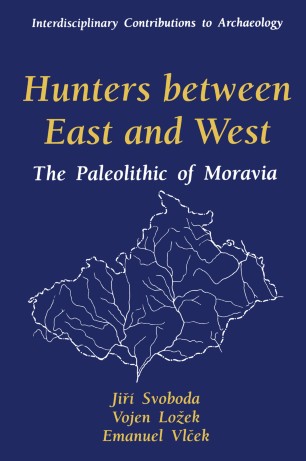 Hunters between East and West

The Paleolithic of Moravia

At first glance, the archaeological record of Moravia has been quite visible in the Anglophone world. Bits and pieces of this record have repeatedly made headlines in both the general and the specialized press for close to a century. First, it was the discovery of a mass grave of some 21 individuals found at the Upper Paleolithic site of Pfedmosti, then the oldest evidence for ceramic technology reported in the first quarter of this century in the Illustrated London News. Later on, the site of Petfkovice, dating some 23,000 B. P. , produced evidence for the oldest burning of coal for fuel, while more recently the New York Times informed us that imprints in clay at Pavlov I attest to the oldest evidence for the making and use of textiles. This list of cultural innovations documented from Moravia can be expanded to include the use of ground stone technology to make stone pendants (e. g. , at Pfedmosti), oflarge ground-stone rings whose use remains enigmatic (e. g. , at Bmo II, Predmosti, and Pavlov I)-but which if found in more recent contexts would pass as querns-as well as of possible needles (again at Predmosti).