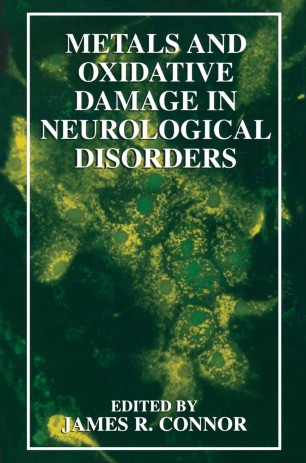 The purpose of this book is to bring together scientists and clinicians interested in oxidative injury in the nervous system but whose approaches to investigation and treatment design vary widely. Indeed the goal of this book is to show that the investiga­ tive approaches and potential therapeutic interventions perhaps do not vary as widely as some may think. I think that the readers of this book will not read it from front to back, but will pick chapters of interest. Thus, the chapters are organized to contain information that is essential to understanding basic aspects of oxidative injury, and thus have some redundancy. However, within the context of each chapter the reader should hopefully find impetus and direction to go on to another chapter. The book is divided into three seetions. The first section contains reviews of metals and their role in generating oxidative injury. lron is considered in three of these chapters because of its relative abundance in the brain and its potency in inducing free radicals. The second section focuses on mechanisms by which the brain attempts to protect itself from oxidative injury. Some of these mechanisms have the potential to be protective in some situations and potentiaIly damaging in others. The third section contains the clinicaI diseases in which oxidative injury is known to contribute to the pathogenic process. This seetion ends with a chapter on antioxidant therapeutic strate­ gies in neurological disorders.