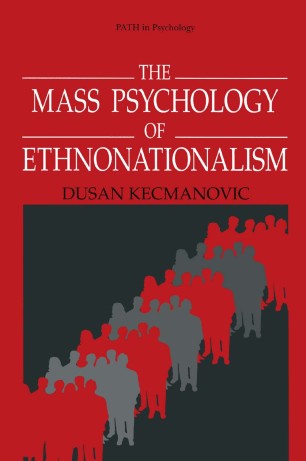 The Mass Psychology of Ethnonationalism

Throughout the nineteenth and twentieth centuries, ethnonationalism has left its indelible mark on Europe and every other continent. The latest events in the Balkans, in central and eastern Europe, and in the former Soviet Union unequivocally testify to the power and influence of ethnonationalism at the end of the second millennium. What forces make people so committed to their ethnonational groups that they are ready to ignore all other concerns, first and foremost the rights and interests of people of other ethnicities? What is the social psychological and anthropological underpinning of ethnonationalism? And finally; why and how do people adhere to nation­ alist attitudes and beliefs? These questions are virtually impossible to avoid for anyone who has directly felt the impact of ethnonationalism, but they also present them­ selves to anyone who has indirectly experienced the prejudices unleashed by ethnonationalist forces. This book attempts to answer all these questions by focusing on national feeling and the social psychological and anthropological founda­ tions that underly the sense of belonging that is essential to nationalism. No matter how qualitatively different nationalist attitudes and beliefs are from national sentiment, the latter has to be considered in any study of national­ ism.