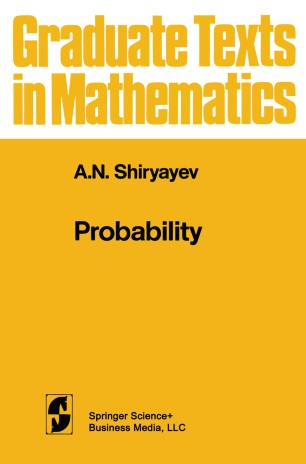 This textbook is based on a three-semester course of lectures given by the author in recent years in the Mechanics-Mathematics Faculty of Moscow State University and issued, in part, in mimeographed form under the title Probability, Statistics, Stochastic Processes, I, II by the Moscow State University Press. We follow tradition by devoting the first part of the course (roughly one semester) to the elementary theory of probability (Chapter I). This begins with the construction of probabilistic models with finitely many outcomes and introduces such fundamental probabilistic concepts as sample spaces, events, probability, independence, random variables, expectation, corre­ lation, conditional probabilities, and so on. Many probabilistic and statistical regularities are effectively illustrated even by the simplest random walk generated by Bernoulli trials. In this connection we study both classical results (law of large numbers, local and integral De Moivre and Laplace theorems) and more modern results (for example, the arc sine law). The first chapter concludes with a discussion of dependent random vari­ ables generated by martingales and by Markov chains.