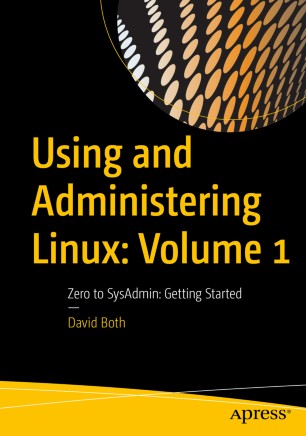 Zero to SysAdmin: Getting Started

Become a Linux sysadmin and expert user of Linux, even with no previous Linux experience and learn to manage complex systems with ease.  Volume 1 of this three volume training course introduces operating systems in general and Linux in particular. It briefly explores the The Linux Philosophy for SysAdmins in preparation for the rest of the course. This book provides you with the tools necessary for mastering user management; installing, updating, and deleting software; and using command line tools to do performance tuning and basic problem determination.

You'll begin by creating a virtual network and installing an instance of Fedora – a popular and powerful Linux distribution – on a VirtualBox VM that can be used for all of the experiments on an existing Windows or Linux computer. You’ll then move on to the basics of using the Xfce GUI desktop and the many tools Linux provides for working on the command line including virtual consoles, various terminal emulators, BASH, and other shells.

Explore data streams and the Linux tools used to manipulate them, and learn about the Vim text editor, which is indispensable to advanced Linux users and system administrators, and be introduced to some other text editors. You’ll also see how to install software updates and new software, learn additional terminal emulators, and some advanced shell skills. Examine the sequence of events that take place as the computer boots and Linux starts up, configure your shell to personalize it in ways that can seriously enhance your command line efficiency, and delve into all things file and filesystems.

David Both is an Open Source Software and GNU/Linux advocate, trainer, writer, and speaker. He has been working with Linux and Open Source Software for more than 20 years and has been working with computers for over 45 years.  He is a strong proponent of and evangelist for the "Linux Philosophy for System Administrators." David has been in the IT industry for over forty years.

He worked for IBM for 21 years and, while working as a Course Development Representative in Boca Raton, FL, in 1981, wrote the training course for the first IBM PC. He has taught RHCE classes for Red Hat and has worked at MCI Worldcom, Cisco, and the State of North Carolina. In most of the places he has worked since leaving IBM in 1995, he has taught classes on Linux ranging from Lunch'n'Learns to full five day courses. Helping others learn about Linux and open source software is one of his great pleasures.

David had some amazing teachers and mentors in his 40 years in IT and more than 20 years working with Linux.  At their core, Linux and open source in general are about sharing and helping others and about contributing to the community. These books, along with “The Linux philosophy for SysAdmins,” are a continuation of his desire to pass on his knowledge and to provide mentoring to anyone interested in learning about Linux.

David is the author of The Linux Philosophy for SysAdmins (Apress, 2018) and can be found on Twitter @linuxgeek46.