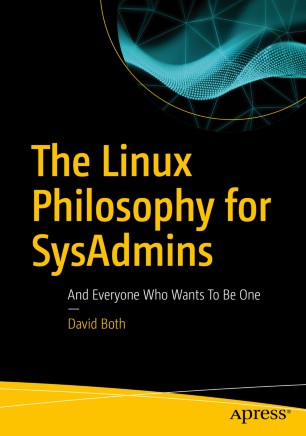 The Linux Philosophy for SysAdmins

And Everyone Who Wants To Be One

Reveals and illustrates the awesome power and flexibility of the command line, and the design and usage philosophies that support those traits. This understanding of how to extract the most from the Linux command line can help you become a better SysAdmin. Understand why many things in the Linux and Unix worlds are done as they are, and how to apply the Linux Philosophy to working as a SysAdmin.

The original Unix/Linux Philosophy presented foundational and functional tenets - rules, guidelines, and procedural methods - that worked well. However, it was intended for the developers of those operating systems. Although System Administrators could apply many of the tenets to their daily work, many important tenets were missing.

Over the years that David Both has been working with Linux and Unix, he has formulated his own philosophy – one which applies more directly to the everyday life of the System Administrator. This book defines a philosophy, and then illuminates the practical aspects of that philosophy with real-world experiments you can perform. Inspired by David’ real mentors, and dedicated to them, The Linux Philosophy for System Administrators is a mentor to SysAdmins everywhere; remember - "If you fail, you learn."

David Both is a Linux and Open Source advocate who resides in Raleigh, North Carolina. He has been in the IT industry for over forty years and taught OS/2 for IBM where he worked for over 20 years. While at IBM, he wrote the first training course for the original IBM PC in 1981. He has taught RHCE classes for Red Hat and has worked at MCI Worldcom, Cisco, and the State of North Carolina. He has been working with Linux and Open Source Software for 20 years. David has written articles for OS/2 Magazine, Linux Magazine, Linux Journal and OpenSource.com. His article "Complete Kickstart," co-authored with a colleague at Cisco, was ranked 9th in the Linux Magazine Top Ten Best System Administration Articles list for 2008. He has spoken at POSSCON and All Things Open (ATO).